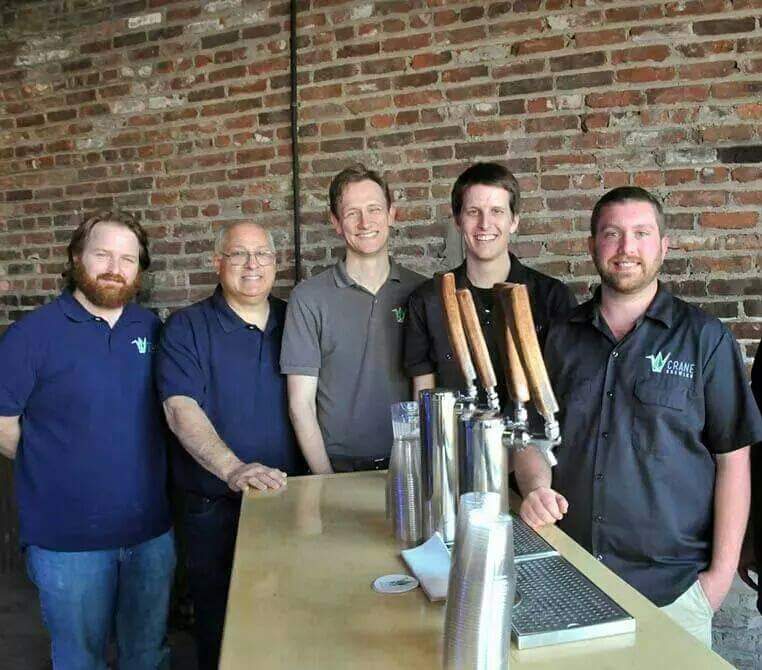 If there’s one thing Kansas Citians love, it’s craft beer. This year alone six new breweries are set to open around the metropolitan area. One of them is the highly-anticipated, Raytown-based Crane Brewing Company. We recently had the pleasure of sitting down with Crane Brewing Company’s Vice President Chris Meyers and Head Brewer Steve Hood, where we talked about (among other things) opening a brewery in Raytown, the tight-knit and vibrant Kansas City craft beer community and—of course—delicious, delicious beer.

1. There are a number of new breweries opening up in KC this year. What do you think sets Crane Brewing Company apart?

Steve: Everyone has their template for what they make—you make your pale ales, your IPAs, your stouts. We’re launching with three sour beers and two saisons and I don’t think anyone does that. It’s tricky, sometimes, convincing people that, “No, I think we should make saisons and sour beers right off the bat and not have those other beers.” It will actually be the way for us to be successful in the midst of so many new breweries coming on board. It’s easy to get lost in that, but I think it’s what will set us apart.

Chris: Craft beer drinkers always like to try something new and I think that’s what’s appealing about what we do. There are beers that we’ll make on an annual basis but we’re always going to come out with new stuff. We don’t really want to have any flagships and so I think that’s intriguing to people, too.

2. What’s the most surprising thing you guys have encountered since you started?

Chris: The whole thing has been pretty humbling. The city (Raytown) totally latched on and has been a big supporter. They’ve done everything in their power to get us going and help out, to the point of them rezoning so we would fit in there. Raytown’s community is really close, but there hasn’t been as much new stuff going in there so they’re excited about new draw and new revenue. Plus, we found that there are a lot of craft beer drinkers in Raytown.

Steve: We may have had some preconceived notions about being Raytown, but those have been shattered pretty quickly. The fire marshall is into beer, the police department is into beer. It seems like one person after another at our events is saying, “I’m from Raytown and I’m really excited about you guys and I can’t believe there’ll be a brewery in Raytown.” They’re really excited to have something nearby.

Chris: I grew up in the metro area and the fact that we can do something like this in our community is the most exciting thing for me. Being able to share this craft that I love with the people that I’ve been around my whole life is fulfilling. It doesn’t feel like i’m putting in that many extra hours because I’m doing it for the brewery. It’s very satisfying.

3. What’s the best thing about working in a brewery?

Chris: I think it’s a mix. We’ve spent a lot of hours together over the past year brewing and planning—realizing that we get to do that for a living is very appealing. The craft, the science— when you get down to it, it’s very exciting.

Steve: I think messing with people’s preconceived notions of what beers are and seeing their surprise. When people are used to having watery beers and you give them a sour beers and they get really excited—seeing their reactions is equally exciting. Also, having enough beer to give to my neighbors. I was reading about craft breweries recently, about why craft breweries are popular and successful and it’s not because of money—brewers are doing it because it improves their quality of life. They get to do something they really, really love and whether it makes them a ton of money or they only make a decent living, it’s simply so much fun to work at a brewery.

Gerald Smith is the President and CEO of Plexpod, a state-of-the-art coworking center located in…